I visited Spain about ten years ago and absolutely loved it. It’s been on my list of countries to get back to over the last year but it was only a few weeks ago that I finally made my return visit. When I was in Barcelona all those years ago I was enamored by the colors, the tiles, the architecture, the vibrancy of the city, and not to mention how cheap food and wine was. Although this recent trip was to a completely different part of Spain I was reintroduced to it all again and so much more. 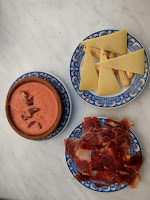 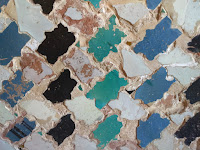 This go-round Andalusia was the region of choice with stops in Cordoba, Granada, and Seville. I was also in Madrid (very briefly) and the nearby town of Segovia. However, it poured rain and was freezing in Segovia so the charm of it didn’t really come through. Not to mention that the castle there that was apparently inspiration for Disney was half covered in scaffolding so that was a fail also. A proper visit to Madrid and Segovia version two are needed.


Despite the rain and cold around Madrid when I made my way south the weather was gorgeous. My timing was perfect, the temperatures were rising (but no where near the oppressive summer heat!) and the rain had cleared out.


To be honest I knew pretty much nothing about Andalusia before I arrived. Granada had long claimed a spot on my travel list purely because a former Google boss raved about spending time there and the delicious tapas everywhere. As luck would have it he’d recently taken the plunge to leave Google and spend time back in Granada working in a chef friend’s kitchen and would still be there when I wanted to visit. Perfect! With Granada a definite stop I sought the advice of a few other friends to determine what else to do in the area and how to get between cities. Let’s be honest though, main goal was lots of tapas eating and wine consumption with some sight seeing on the side. Despite my fumbling limited Spanish, often mixing in French words to make it even worse, I was very successful on all fronts!

I thoroughly enjoyed the sights, the Arab influence all around, the laid back atmosphere of the region, and of course the eating and drinking. I became obsessed with tinto de verano which is red wine with gaseosa (a Sprite like drink) early on in the trip and at at least one glass per day. It's basically a simple sangria and certainly the best way to enjoy red wine when it's hot out! If the french can put ice cubes into rose when it's hot then the Spanish can jazz up their red wine.

Lots and lots of photos - I couldn't help myself!
Cordoba
Granada
Seville
Segovia


Cordoba’s most famous sight is the Mosque-Cathedral. This is a spectacular display of Islamic architecture later expanded upon and transformed into a Catholic cathedral - as is very much the theme in this area. You enter into the original mosque area with a sea of columns and archways. As you meander around you eventually start to see signs of the Christian takeover and then you suddenly find yourself standing under what feels like a towering dome. Light floods into the choir and chapel area which is a stark contrast to the low light of the other areas of the building. Despite the fairly large crowds and selfie stick posing the space is incredible. 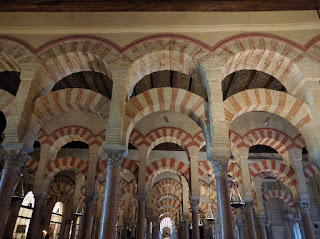 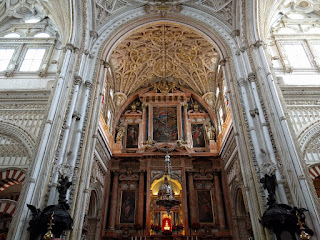 Cordoba is also well known for its patios - building or home courtyards - filled with colorful flowers. Each year for two weeks in May Cordoba holds La Fiesta de los Patios de Cordoba in which there’s a competition across the city and it’s free to enter into various patios. I happened upon the last weekend of the festival during my visit - lucky me. While it meant that there were loads of people and the lines to get into the patios were ridiculously long it was absolutely worth it to check out a few of them. Award winning patio owners proudly display their prior year plaques on the walls and welcome you into their carefully maintained garden oasis.  If you happen to be in Southern Spain in May this is definitely worth a visit. Throughout the year some owners do let people into their patios to check out their displays so all is not lost. 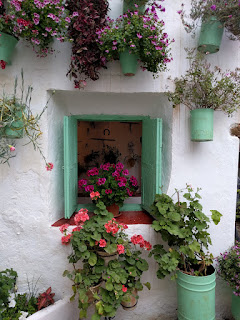 When I wasn’t queuing up for patio viewings, getting lost among the archways of the Cathedral, or sipping on tinto de verano with a side of tortilla or salmorejo (gazpacho) I caught a few of the other suggested sights. Some highlights were

After a day and a half in Cordoba I headed to Granada.


First order of business in Granada, tapas and finding Jesse (my former boss) so he could show me the ropes. This is the one place in Spain where you’re guaranteed to get a free tapa with each drink that you order. You can basically eat for free as you enjoy wine or your drink of choice. And when wine is only 2-3 EUR a glass it’s a pretty cheap meal! The tapas also tend to get better the more drinks that you have in one given place - not on the fact that you’re drunk but that they give you larger or higher quality plate with subsequent drinks. So you can either hop from bar to bar getting a new nibble at each one, or stick to one place and enjoy a few. No better way to catch up on post Google life with Jesse than over drinks and tapas!! 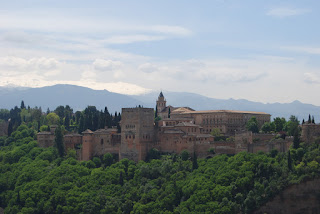 In addition to tapas Granada is home to the Alhambra. Visiting this palace and fortress atop a hill overlooking the city is a magnificent way to spend the better portion of a day. You can spend hours just wandering through all of the various gardens, checking out the views, and trying not to get lost. The main attractions within the Alhambra walls are the Nasrid Palaces and Generalife.


Your ticket specifies the time in which you will enter the Nasrid Palace which is nice because it helps to manage the crowds - but you have to make sure to make it in during your time slot! I found that even though there were a fair number of people many of them were in groups so if I lingered a bit in one room or courtyard I’d soon have it all to myself. There are endless archways, intricate ceilings, tiles, and water features to enjoy. 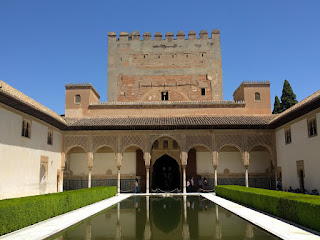 The gardens of the Generalife are beautiful. This area of the Alhambra was meant for relaxation and a place to be away and I could certainly see why. Being there in spring I was able to take full advantage of the added colors of everything blooming. 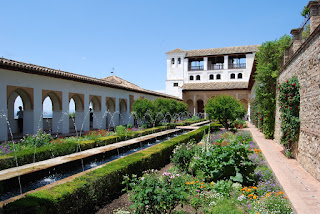 After my visit I made my way to the restaurant where Jesse was working in the kitchen. The restaurant Carmen de San Miguel is located right near the Alhambra and has some amazing views of its own over the city and across the the Sierra mountains. Jesse told me that Jorge the chef was just going to start cooking for me and before I knew it I was being brought course after course of deliciousness. I was in food heaven! Everything was so tasty and it was great to be able to try many different regional dishes. I probably shouldn’t have been eating everything off each plate but I couldn’t help myself they were all so good. And not to mention wine selected for each one. It was a perfect post Alhambra afternoon. Definitely check it out if you’re visiting! 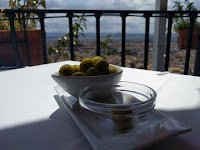 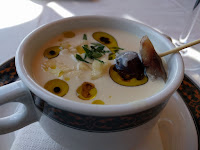 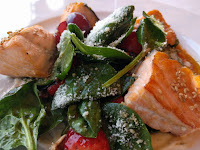 The rest of my time in Granada included a lot of wandering around - there’s some really good street art there that I stumbled upon - popping into for a drink and a tapas or two, continuing on my way and repeating. Pretty great way to spend a day.

Now that Jesse and I were caught up on life, I’d been given the royal treatment for lunch, and I had the true tapas experience I headed to Seville. With just one day to see some of what Seville has to offer I dropped my bags off upon arrival, grabbed a map, and headed off. I figured I’d see a few of the major sights and then do the usual wine and tapas routine when I needed food. No free tapas here but delicious and cheap nonetheless. 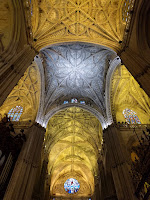 I decided I’d start by queuing up to visit the cathedral. The line wasn’t terrible - though I was baking in the sun at points - and once inside it’s quite beautiful and absolutely massive. Little did I know that it’s the 3rd largest church in the world and the largest Gothic cathedral. It contains Christopher Columbus’ mausoleum - I wondered what hoards of people were gathering around until I finally figured it out. There’s also a tower, from the original mosque that stood on this site, that you can climb the seemingly endless ramp/stairs to the top for views across the city.


I left the cathedral, wandered through the old Jewish quarter, and then made my way to the Plaza de Espana. The tiles, the colors, the columns, bridges and loads of small detail throughout were mesmerizing. I probably could have spent the whole afternoon there taking photos from every angle. I was surprised that this felt pretty empty given all of the crowds that were in and around the cathedral. Fine by me! 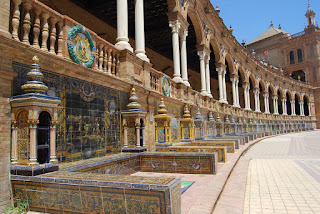 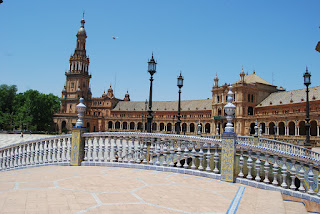 Following a bit of a rest in the Parque Maria Luisa I finished off the trifecta of my Seville sightseeing by heading into the Alcazar and it’s gardens. Having been to the Alhambra before the Alcazar it wasn’t as amazing as I might have thought had I not already spent hours wandering through admiring the Islamic architecture, waterways, and gardens of the Alhambra. It’s still worth a visit though and the gardens are quite nice with a variety of different areas and styles to walk through.  Also, I didn’t know it at the time but apparently a number of Game of Thrones scenes from last season were filmed at the Alcazar. That now makes 2 Game of Thrones filming location visits for me in the last few months, ha! 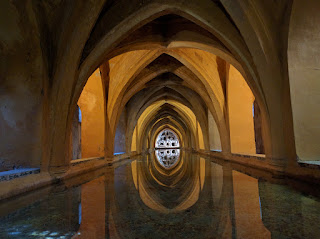 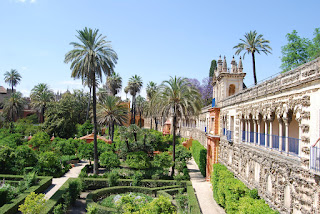 One spot that I didn’t get to fully enjoy was the Metropol Parasol - apparently the largest wooden structure in the world and offering some of the best views of Seville. I was only able to pass by this on my way to the train station as I was heading out of town to snap a few pictures. It was a beautiful structure and next time checking out the views from the top will be first on the list of to-dos. 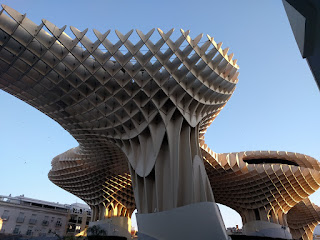 From Seville I headed back to Madrid by train and then to the airport to fly back to Nice. My Spanish week was filled with color, beautiful architecture, delicious food, and good fun. I’ll definitely be back to enjoy more tinto de verano, salmorejo, and tapas. 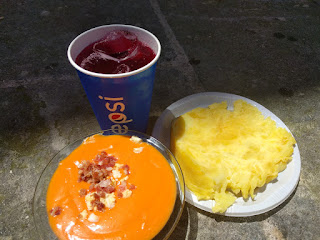